1. The League at present shall consist of leagues of mixed doubles, men’s doubles and ladies’ doubles.

1a. No division shall consist of a greater number than 7 teams except in the case of lowest divisions, which may be increased to accommodate new teams at the discretion of the league match secretary involved. The optimum number of teams in the first division is considered to be six.

1b. All new teams and re-entries to the league shall commence in the lowest division then in existence.  Promotion and relegation shall be by virtue of final positions in the division.

1c. Any league club, before the start of each new season, at the discretion of the Committee, will have the option to refuse promotion, volunteer for relegation or withdraw any team regardless of division. Any club refusing promotion, or volunteering for relegation, will be barred from promotion in the following season.

1d. All matches must be played under the rules of Badminton England unless superceded by a separate league rule.

2. SSBL shall be governed by a committee which shall consist of a chairman, secretary, treasurer, and match secretaries, plus up to five others who shall be elected at the AGM by vote. The committee shall have the power to co-opt if considered desirable.

A meeting of match secretaries will be agreed at the AGM.  It will be held in early September, prior to the start of the new season for the purpose of fixing dates for SSBL matches.  Attendance at this meeting shall be compulsory.  Clubs not represented shall be excluded from the League.  In the event of an emergency causing non-attendance, appeal for reinstatement may be made to the League Committee within 7 days.

3. The current charge for entering a team is £5, which must be paid before leaving the Match Secretaries’ Meeting. All outstanding league fines, from the previous season, to be paid to the treasurer at the fixtures meeting.  Failure to do so will result in removal from the league.

4. All clubs shall be affiliated to the Staffs County, and must pay the required affiliation fees at the Match Secretaries’ Meeting.

Mixed and Ladies teams shall consist of two pairs who play both opposition pairs, followed by two additional matches with the pairings swapped over.

6. All matches will be the best of three games to 21 points, and each game shall be scored according to the rally-point scoring system. The player serving from the right court at the start will always be in the right court when the scores are even.  If the score reaches 20-all, then the team to move two points in front is the winner.  If the score reaches 29-all, the game is won by the side winning the next point.  In the event that a third game is required, the players shall change ends when the leading score reaches 11.

7. No change shall be made to the composition of the teams engaged in a match after the start of play. 1 point penalty will be imposed on any team not conforming to this.  In the event that an unfinished match requires completion, the same pairs must represent the clubs for the completion of the match.

8. 2 points are awarded to the overall winners of a match, and one point each in the event of a draw. A record of each game must be recorded on the match card and firstly rubbers and then games will decide final league positions.  (see rule 11 concerning match cards)

9b. In the event that a team wins the league, gains promotion or is relegated as a result of a match being conceded, every effort should be made to rearrange and play this fixture at the end of the season, before the AGM.

9d. Any team missing 3 fixtures will be removed from the league.

10. Players taking part may agree to the games being scored alternately by members of each club. In the event of a dispute during a league match, a ‘let’ shall be called and the point played again.  All clubs should be conversant with Badminton England rules concerning foul shots.  It is not a scorer’s duty to call either.

11. A copy of all match cards must be held by the captain of the home team. Failure to do so will result in a penalty point being deducted.  The home club shall post or e-mail the match card to the appropriate League Match Secretary within 7 days of the match.  Clubs which send in match cards late shall be fined £1 for the first offence, £5 for the second and £15 for the third occasion in any one season.  For any subsequent occasion in the same season, 1 point will be deducted.  Registered players

12. All registered players must be subscribing members of the club they are representing. No player shall be eligible to play for more than one club per category, unless there are exceptional circumstances, subject to annual permission from the League Committee and both clubs concerned.  These circumstances shall be interpreted as meaning only when clubs are in difficulty in raising a team in any season, or a club withdraws from the league in that season.

13. All players must be submitted for registration with SSBL at the Match Secretaries’ Meeting or prior to the club’s first match, any registrations after this will incur a 14 day waiting period before the player is eligible to play. Any additions to a club’s registered players list should be by telephone or e-mail first, but must be confirmed by a second means. Misdirected or unreceived emails will no longer be accepted in mitigation.  The telephoneor e-mail date will be the effective date of registration.  Clubs using non-registered players in a match will forfeit the match and will be deducted one penalty point.  Repeated breaches of this rule may result in further penalties.

14. All games shall commence at the agreed starting time. The first two games must be ready to commence no later than 15 minutes after the starting time.  It is the duty of the home team to see that the games commence when sufficient players are present, irrespective of there being selected partners.  Any team home or away causing a late start will forfeit the respective rubber, and therefore commence with the next rubber.  Any match not begun within one hour of the agreed starting time shall be deemed forfeit.

In the event that a match is unfinished when the court time has expired, then all remaining rubbers are awarded to the away team.

15. Fixtures may only be postponed by reasons beyond the control of the clubs concerned, such as loss of hall or climatic conditions. The sanction of the League Match Secretary must be given before the applying club contacts their opponents regarding postponements.  Any club unable to fulfil an away fixture should give the opposing team at least 48 hours notice.  Failure to do so will result in the away team being charged court-time costs.  The match secretary to be informed within 24 hours of any postponed match, and a new date for the fixture to be provided within 21 days, to the match secretary.  A one point penalty will be imposed for not informing the respective match secretary of the re arranged date.

Under no circumstances must fixtures be arranged or rearranged outside the normal winter season finishing date of 30 April.  Therefore no games should initially be arranged for after 15 April.

Opposing pairs shall mutually decide when a new shuttle is necessary.  In any disagreement, if the shuttle does not travel the required distance in the required manner, it should be changed.

17. Where a club has 2 teams in the same category but in different divisions, they must ensure that 3 matches for the higher team(s) are played prior to 3 for the lower team(s).  In addition 4 players must be nominated for the first team and they may only play for that team throughout the season.  Any player for the second team may play for the first team twice, but a third time would make him ineligible for any game in a lower team in that category.

Where a club has more than 2 teams in the same category but in different divisions, 4 further players must be nominated for the second team.  They are ineligible for competition in the third team but are still allowed to play for the first team on no more than 2 occasions.  Members of a third team are eligible to Play up on two occasions either for the first or second team but would be ineligible for the third team after playing up on three occasions.

17a. Where  a club has 2 teams in the same division, all first team players must be nominated and these players will be tied to that team for the season.  Rule 17 applies to any subsequent teams.

17d. Nominations of players should be completed before the club’s first league match, but not later than 1 October.  Where 2 teams from the same club are in the same division 4 of the nominated players must play at least 50% of that team’s games and the remaining 2 must play at least 3 matches.  Should nominations occur where 2 teams are in separate divisions then all nominated players need to play 50% of matches.  When a club becomes aware that a nominated player will not be able to fulfil the commitment to play 50% of that team’s matches, the Match Secretary must be informed and a new player nominated as soon as reasonably possible.  A one point penalty per player per match shortfall shall be imposed for any player who doesn’t conform to this, the committee will consider mitigating circumstances e.g. whereby a player is injured or leaves the club, as long as the relevant match secretary is notified at the time the circumstances occur.

17e.  Where a club has 2 teams in the same division, the fixtures between the two Teams should be completed before 1st November.

18. Any decision made by the Committee shall be final unless rescinded or amended by an AGM or an EGM.

19. All matters not provided for by these rules shall be dealt with as the League Committee may determine.

21. Any club found to be responsible for loss or damage of South Staffs Badminton League trophies must pay for repair or replacement. All league trophies to be returned to a member of the League Committee by 1 April.  Failure to do so will result in a fine for the club concerned of £20.

In the case of a match (tie) being conceded, the offending team will be docked 1 penalty point.  The offended club will receive only the match points.

23. Any team that does not send enough eligible players to obtain a result (i.e 2 pairs mens doubles, or 3 players in mixed and ladies) will be deduced 1 penalty point.

24. Any circumstance created by a club which affects the efficient administration of the league will incur a financial penalty.  This could cover failure to provide contact details for the handbook and major match card errors.  Fines to be applied: 1st Offence £5; 2nd Offence £10; 3rd Offence £20 etc.  Fines to be applied per club and not per team. 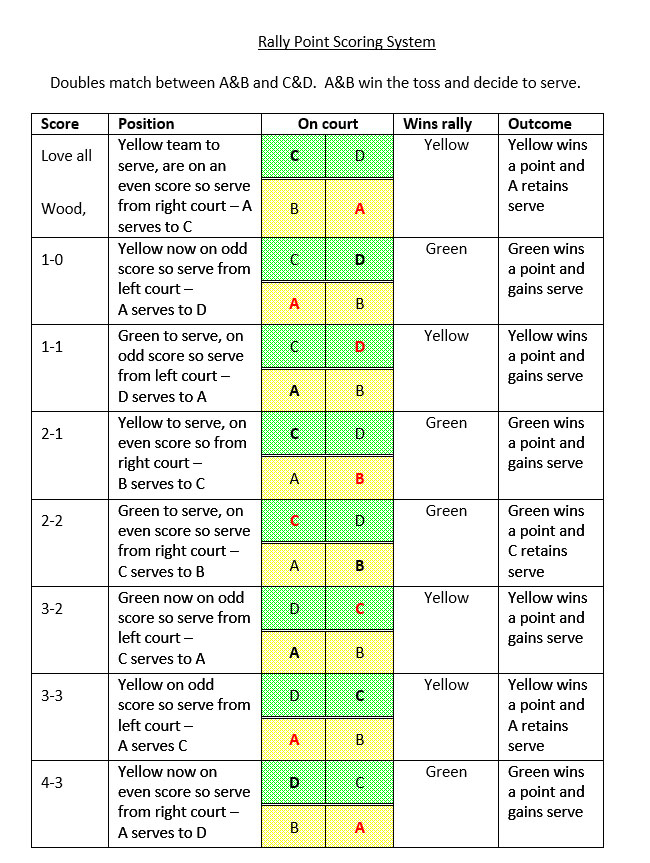